“Hank” had been struggling for some time with chronic laminitis when he arrived at Mayfield.

He was in top show condition but getting progressively more lame and was highly dependant upon anti-inflammatory medication.  He was shod on the front feet and although his shoeing was well-balanced and neat (what would be considered first class farriery) his feet were far from healthy.  Externally they had the appearance of petrified wood; internally the pedal bones were both sunken and rotated.  His hind feet were unshod but were well trimmed and a picture of health. The difference between fronts and hinds could not have been more marked.

Where chronic lameness is caused by loss of function, the best shoeing job on the planet can’t help in the long run.  After removal of shoes, trimming and dietary changes, Hank began his rehabilitation with the aid of natural anti-inflammatories. His recovery was rapid. There was not one moment when he did not want to move. Weekly trimming and daily exercise kept him in shape and once his heels had grown down in 3 to 4 months, he returned to work under saddle.

There was one complication for this horse which was his club foot. In rehab he needed the added support of a polyurethane sole protector which also helped put his foot at a better angle.

It should be noted horses that have suffered chronic laminitis for a long time never seem to regain their “all terrain” feet.

In the case of “Hank”, he is quite sound but would most likely need the added protection of hoof boots when ridden out on surfaces such as gravel roads. 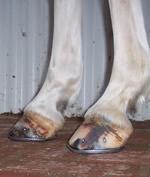 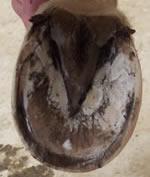 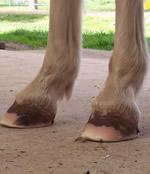